Steve Carmentran was born on 29 December 1980 in Esch-sur-Alzette (L).

He started his diving career in 1997 during a trip on the island of Mallorca where he received his first diving certification. Hobby diver for many years, he started to invest himself more seriously in 2004. After working through the different certification levels in recreational diving, he became state instructor when he received his CMAS* Instructor certification with the Luxembourg Federation  F.L.A.S.S.A. in 2013.

Eager to share his passion and the beauty of the underwater world with his friends and the general public, he bought a compact camera in 2004 and took his first ‘steps’ in underwater photography during a stay in Cuba. Having caught the underwater photography bug, Steve has hardly been diving without his camera ever since. In 2006, he started using a bridge camera, but in 2010 he took a big step and switched to reflex by getting himself a Canon EOS 400D in a UK-GERMANY housing.

Once familiar with the new equipment and thousands of pictures later, he took part in various underwater photography contests such as the DAN EUROPE PHOTO CONTEST (where he achieved 3rd place) or the VISIONS annual competition run by the German magazine UNTERWASSER where, in 2012, he was one of four representating Luxembourg.

After finishing twice in the Top Ten of the monthly contest run by the German magazine Tauchen he began shoot-out competition photography in earnest in 2013. Selected by the Luxembourg Federation to represent his country, he took part in the first International Underwater Photography Challenge of Monaco, which was also the opportunity for him to officially start his collaboration with his assistant Jean-François Leblond, a long-time friend and usual diving partner.

Improving his shooting techniques and his model photography, Steve took part in the National Competition of Underwater Photography of Monaco in 2014, where Jean-François and he finished with a 5th place in the final ranking

Steve has been selected by the F.L.A.S.S.A. and represented Luxembourg at the 15th C.M.A.S. Underwater Photography World Championships which took place in Zeeland (NL) in May 2015.

Steve is currently active diving instructor at the diving club Plongeurs Differdange (PLD) where he is responsible for the training of divers and where he uses his photography talents to show his students the beauty of the underwater  world they are about to discover. 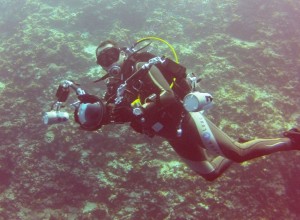