The First International Challenge of Underwater Photography of Monaco sponsored by the Monegasque Federation of Subaquatiques took place from 3d to 6th of October 2013. 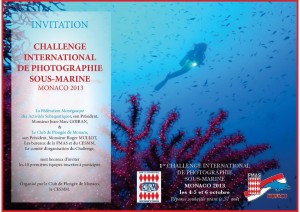 Two dives of 90 minutes each were planned in connection to which the candidates had to present a serie of 5 pictures to the jury (2 photos “atmosphere” 1 photo “fish” and 2 photos “Macro”). The photos were judged by series and no editing or manipulation of the images was allowed. The award ceremony was held in the large conference room of the Oceanographic Museum of Monaco. At this solemn meeting, France, Spain and Germany were rewarded for their efforts by winning the first, second and third place in the competition.

Steve and Jean-François wish to thank the FLASSA for the confidence and for offering them the opportunity to take part in a competition of this magnitude, which was a very rewarding experience for them.

Their participation in this event was covered in the tageblatt article of November 7, 2013.